This small moment in time is inspired by a few readings we did with the teachers of Segundo de Basica (second grade)  by David  Jardine (2008) that spoke of  disrupting unitary fragmented subjects in education (i.e. math, language, reading). We thought about this disruption with Margaret Wertheim’s (2009) Ted talk titled, The Beautiful Math Of Coral, where she described her carefulness in noticing mathematical concepts (and in particular hyperbolic geometry) in ocean creatures. We were inspired by how Wertheim took up mathematical ideas as ones that were learned from coral rather than ones that were directed to learn about coral. This idea was very different from the ways curriculum and ministry requirements had been taken up at Santana a few years prior. In the past, worksheets and rote learning dominated the classrooms as the curriculum focused on the memorization of ideas that were removed from the situated context of Santana and Cuenca. Resultantly, we sought out to experience our walks in the forest mathematically:

While walking along the riverside, we notice an entangled presence of pieces of discarded metal. We wonder how one might consider the metaphor of this decaying artefact and the infinite possibilities of what break down can bring to curriculum making. As we start to touch it and feel it’s textures we maintain a clear intention of noticing metal and its political and ethical relations in an un-romanticized way of thinking about the river, the eucalyptus trees and relations surrounding it. This leads us to explore this winding structure (see photo below) that after some discussion is presumed to be a burned old tire. We think about our relationships with this forest, metal and land and the way in which the material presence of tire and its existence is woven into the ground, plants, and river. Positioning a human-manipulated metal as part of “nature” speaks to this nature/culture inseparability.  We wonder  about what it would take to honour or sustain it’s memory and stumble through various curriculum topics while holding this metal’s history and its relations at its centre.

In attempt to learn from the metal, we plan a meeting together (the children, teachers and pedagogical coordinator) and think about various ways the metal may be represented with math. The interesting part of this metal is that it is falling apart, decaying, and separating into pieces. Thinking about it mathematically is not an easy endeavour. When the pieces come off, can we think of it as a subtraction? An addition? This piece forces us to encounter the reality of a defragmented material . I remember a discussion I had with Ximena, a teacher in the Secundo de Basica, about the interruption that thinking subtraction before addition would make.  At Santana it is usual that we learn adding before subtracting. It is these rigid traces of memory that are haunted by logics of expertise, and the rigidity that come with for example a mastery of isolated subjects, that we want to disrupt. I wonder: how could we follow an inquiry, when we were following just “math steps”?  Thinking with decay muffles up this idea, the metal tire breaks apart, is broken into ash fragments, and is then built anew. In this case, the children think with the metal fragments in different ways as well. We use ash to make new lines on parchment paper, count the pieces and create communal spaces to think about how we could view this piece mathematically. The ash comes together, the fragment pieces move with each other, and the lines are counted, in an attempt to answer: how do we count decay?

I think what is interesting about reframing mathematics in a collective investigative way, is that it allows us to work in movement with a material. Counting, and doing with material, provides a doing and a language that would not have been possible if we simply had a discussion. It reveals a disruption. 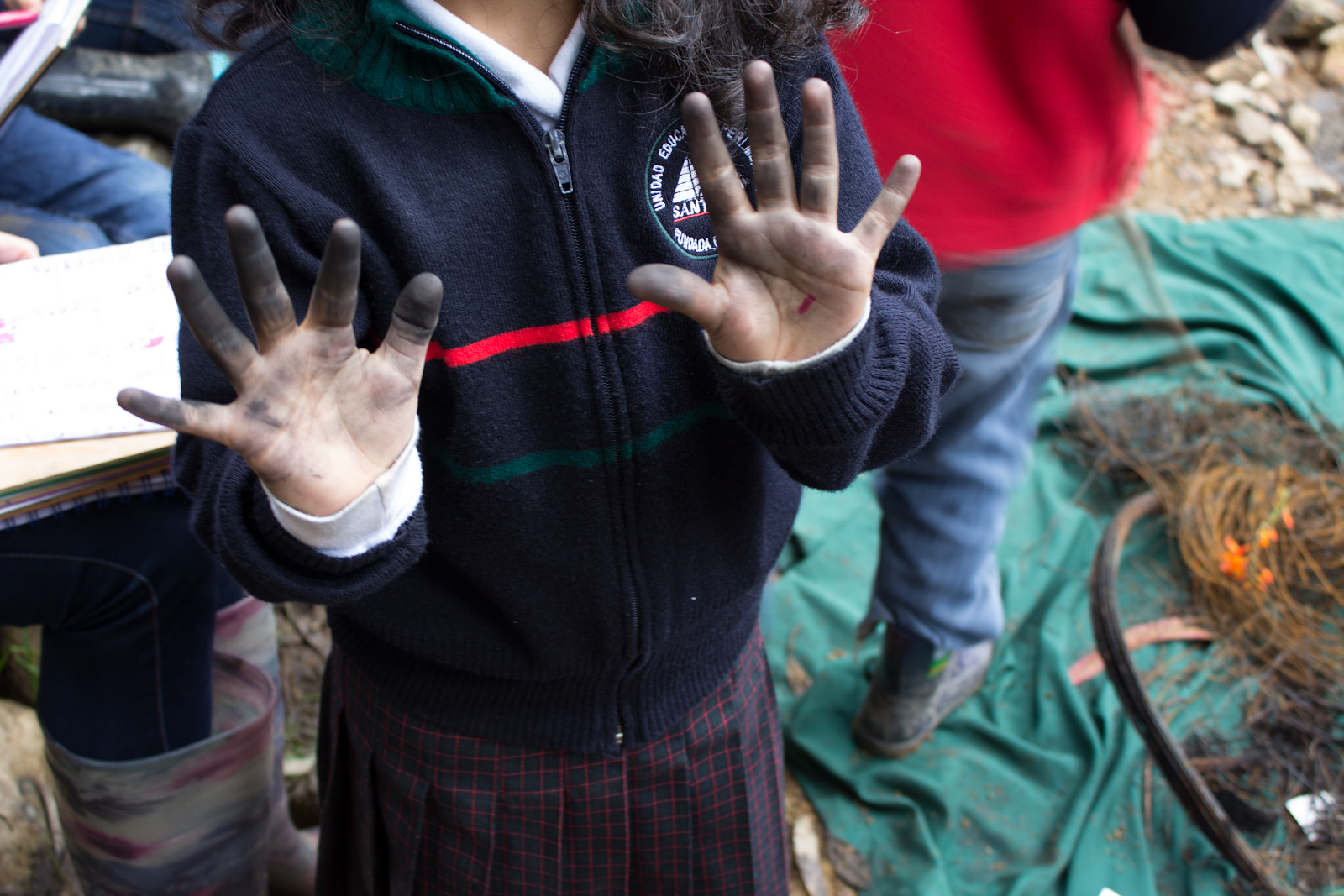 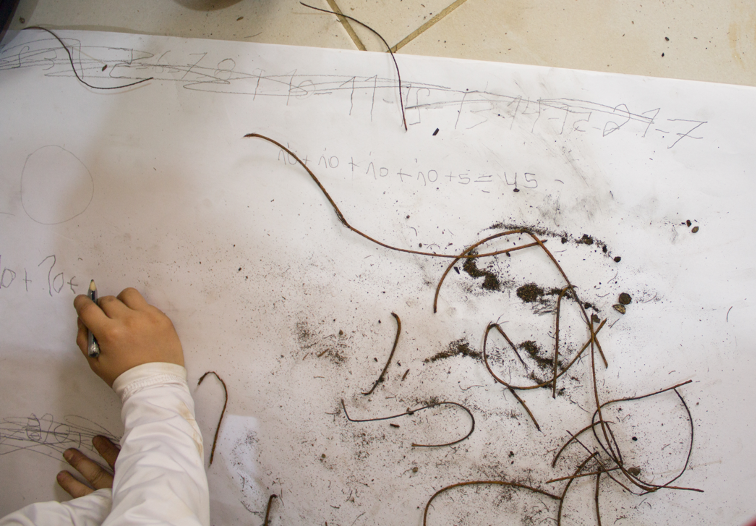 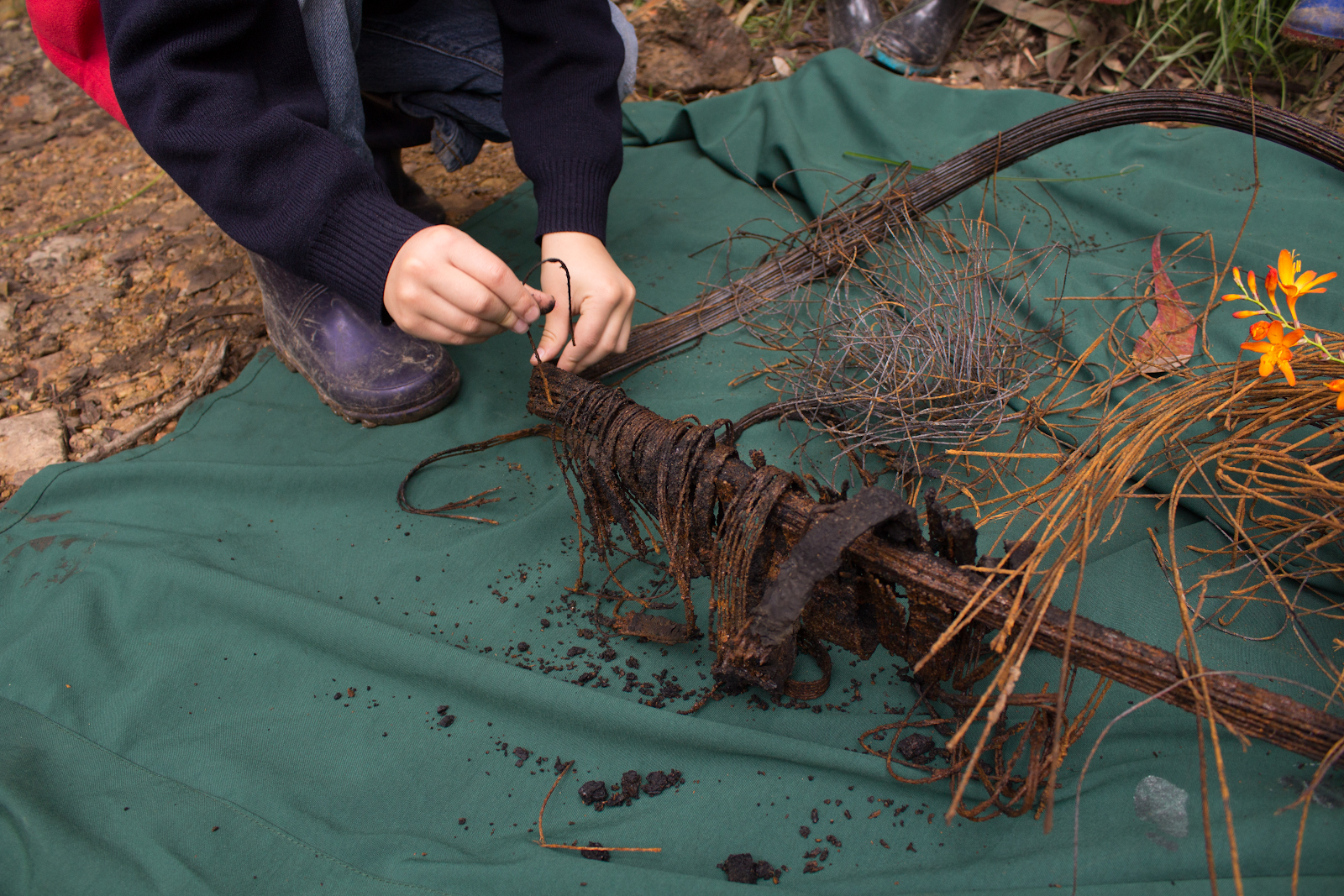